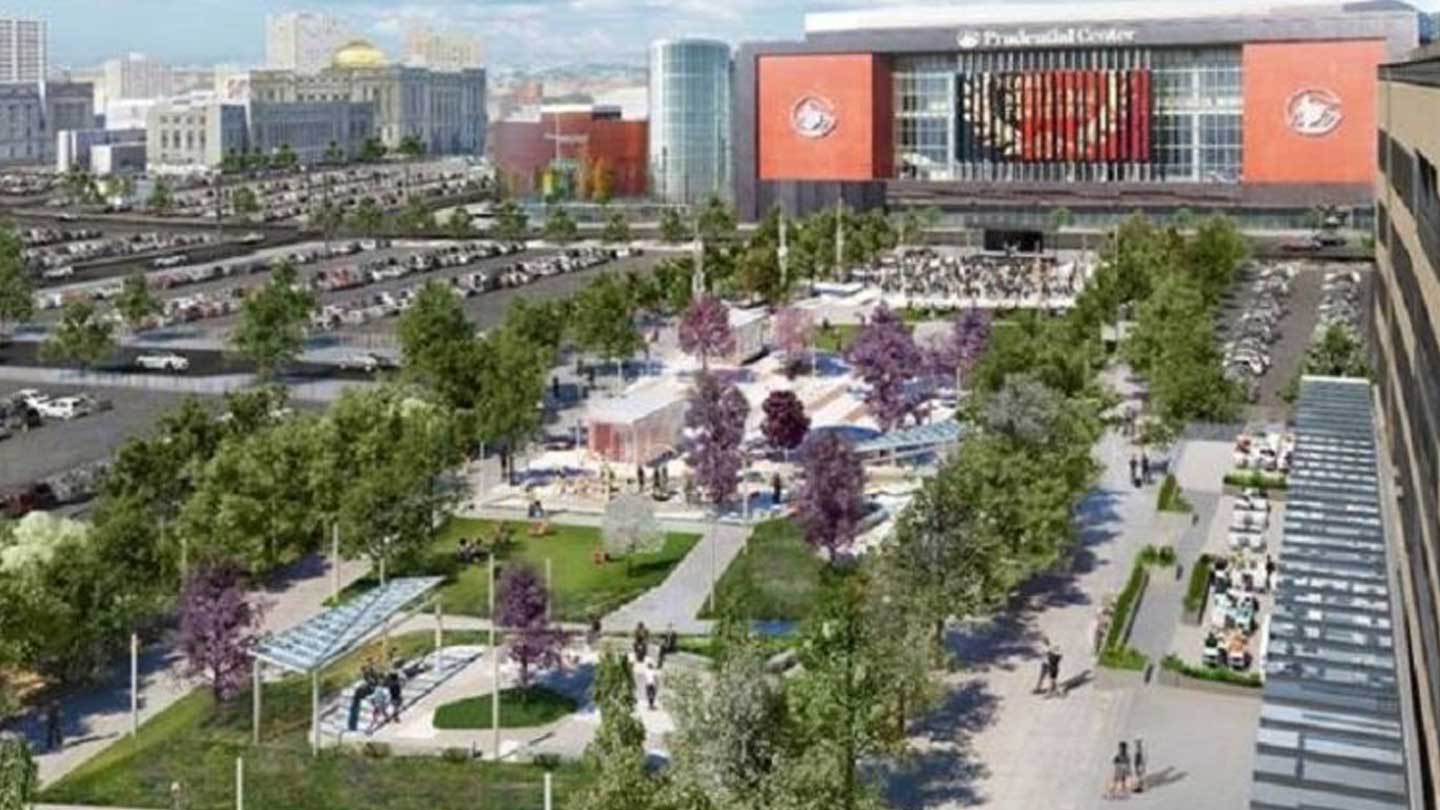 Only about three weeks after the death of Jerry Gottesman, a crowd of Newark stakeholders gathered outside the Prudential Center to mark the start of a project long championed by the iconic property owner.

As one might expect, the late Edison Properties co-founder was top of mind for many in attendance.

“We’ll carry on well because he set the organization up for future success,” said Ben Feigenbaum, Edison Properties’ chief operating officer. “However, with his recent passing, I can’t help but reflect about the pride he would have felt had he been here today.

“Specifically, Jerry was insistent and argued strongly for the arena to be where it is, rather than over here, where a lot of people wanted to put it. And the reason he wanted the arena to be here — which is how its vision has been carried out — was because he felt there would be development opportunities with a great park and a bridge that would connect this park to the railroad tracks and … to the great Ironbound.”

The concept took a major step forward on Monday, as dignitaries and well-wishers broke ground on the long-awaited park project. Known as Mulberry Commons, the 22-acre redevelopment is set to create a sprawling park and public space at what had remained a sea of parking lots around the Prudential Center, encouraging foot traffic and paving the way for new development between the arena and McCarter Highway.

Newark Mayor Ras Baraka marked the start of the $10 million project alongside a long list of business and community leaders, which only seemed fitting given the many stakeholders involved and the history of a plan that was more than a decade in the making. The project was tied to the development of the now 10-year-old arena, which spans Mulberry Street between Lafayette Street and Edison Place.

Those plans were slow to take shape, but the city last year reached an agreement with Gottesman’s firm and J&L Cos., which also owns a large swath of the redevelopment zone, along with others involved in the negotiations. Stakeholders have credited Baraka with ramping up those discussions after taking office in 2014 and pushing the project to the finish line.

“When we first came together there were a lot of interests involved in this, a lot of people at the table and a lot of disagreement, to say the least,” Baraka said. “But by the grace of God and the work that we’ve done, we were able to get to the table and I am so glad that this day is happening.”

The concept for Mulberry Commons includes landscape architecture and open space, with plans calling for a foot bridge that will cross over McCarter Highway and the railroad tracks separating the downtown from the Ironbound. Leading the design efforts for six of the project’s 22 acres are the architectural firm Sage & Coombe Architects and Supermass Studio Landscape Architect.

The new public space, set to open in late September 2018, is expected to open up a vast area of undeveloped land to residential and office development, which Baraka called “a game-changer for the city of Newark.”

Mulberry Commons will be flanked by the Prudential Center, home to the New Jersey Devils and the soon-to-open Grammy Museum Experience, along with an accompanying project by Edison Properties. The firm is rehabilitating a historic warehouse, under an $80 million project that will create 465,000 square feet of loft-style office and retail space.

The momentum in the area was not lost on Hugh Weber, president of Harris Blitzer Sports & Entertainment, the New Jersey Devils and the Prudential Center.

“We see this as an incredible gateway for the 1.7 million people that come to this building every year, the 150,000 people monthly who are coming to Newark to live, play, eat, enjoy all that our city has to offer,” Weber said. “But more importantly, we see this as a place for the people who work here, the people who live here to come enjoy.”

Meantime, J&L Cos. Principal Jose Lopez said his firm was “proud to be a partner in bringing to life Mulberry Commons, a landmark project that will serve as a blueprint for how public and private partners can work together to benefit an entire metropolis.”

“As a family-owned and operated company with close to 50 years in Newark, we look forward to working with the various stakeholders as well as the broader Newark community to capture the economic, artistic and cultural vibrancy we’ve always known the city to have,” Lopez said. “J&L Companies is committed to Newark’s past, present, and future, and we want to ensure Mulberry Commons is for everyone — Newark natives, the next generation of Newark residents, visitors, students, and professionals alike.”