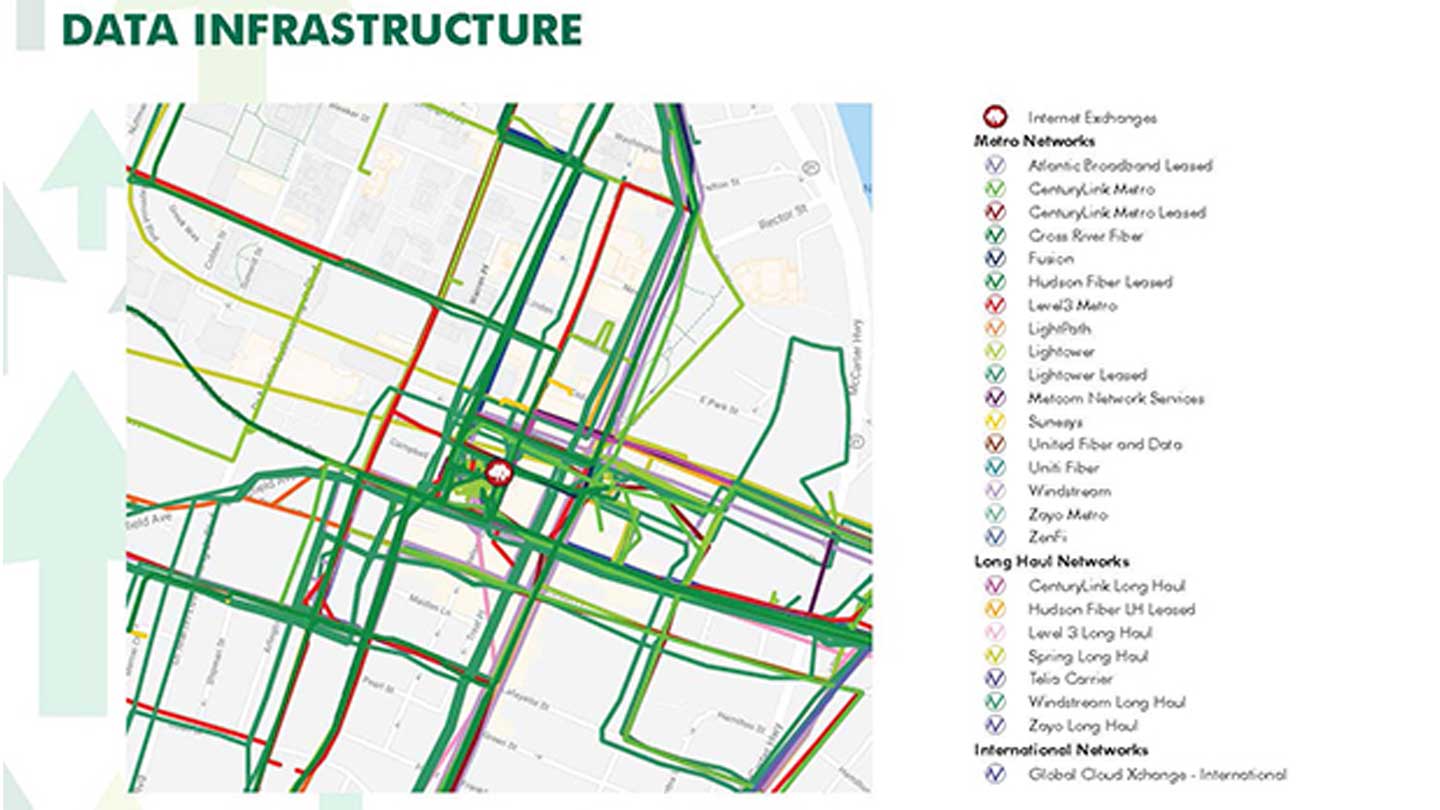 Newark, ‘The Brick City,’ Is The Hub Of The Internet

NEWARK, NJ—If someone asked you to identify the hub of the Internet, you might be surprised to know that one answer might be Newark, NJ.

New Jersey’s largest city, known as the “Brick City,” is undergoing a redevelopment of both office and residential properties. It’s one of 20 cities competing as finalists for the Amazon HQ2 office development that could bring thousands of new jobs to the city (which is already home to Amazon’s Audible.com audio book division).

Brokers promoting Newark as a site for corporate redevelopment/relocation point to the city’s rich transportation infrastructure as a plus for a globalized workforce that needs to get to and from other places easily.

“One thing that Newark has never lacked is transportation infrastructure,” Hipschmann says. “Penn Station, Broad Street Station, Amtrak, New Jersey transit rail. The state’s largest bus depot. The Path, the Newark subway and light rail. Newark Liberty International Airport is one of the nation’s busiest, with over 43 million passengers in 2017 and $2.7 billion in improvements underway, creating 23,000 construction jobs and $4.6 billion in economic activity.”

But another key piece of the Newark picture that gets less attention—because it is part of the plumbing rather than the skyline—is Newark’s extensive data infrastructure.

Newark has made a significant investment in data connectivity, recognizing that the ability of companies to move large quantities of data quickly gives a city a competitive advantage over its rivals. Over the past two decades, telecom and data companies have been digging in Newark, mainly because it is close to New York City, which is a big user of data “pipes.”

The Newark data infrastructure now is the envy of many locations around the country, featuring 10 gigabit-per-second speed, one of the fastest urban data networks. The new owners of the Gateway office complex in downtown Newark have connected the buildings to this fiber optic speedway, making the aging (but renovated) property more attractive to modern office tenants who are shipping pixels instead of boxes.

At the core of Newark’s data success story is a nondescript building a few blocks from Newark Penn Station, the main transit terminal in the city. 165 Halsey, named for its street address, is the gathering point for as many as 60 data communications companies offering Internet connections throughout northern New Jersey.

“It allows them to get a speed of connectivity that quite frankly just doesn’t exist anywhere else, at a fraction of the cost that they would pay if they could get it somewhere,” says Kevin Collins, managing director of asset services and finance for C & K Properties, owner of 2 Gateway. “Newark has absolutely cast its lot to identify itself as an emerging technology hub, and it has made a tremendous difference.”

The Gateway complex has taken full advantage of the bandwidth, according to Dudley Ryan, senior vice president with CBRE.

“We are one of those three triangulation points of the Newark “Firebolt” Wi-Fi network,” Ryan tells GlobeSt.com in an exclusive interview. “We worked with the city to get them off the ground, build the fiber spine in the building and allow the city to attach their Wi-Fi equipment to it. And as part of that, we created the infrastructure that allowed us to then become the first building hooked up to the new fibre network, which allows up to 10 gigabits per second of connectivity to the desktop. We saw it as a huge inducement for tenants of all kinds, because it allows them to get a speed of connectivity that, quite frankly, just doesn’t exist anywhere else, at a fraction of the cost that they would pay—if they could get it somewhere else.”

“The dark fiber that is here is the absolute primary reason why a company like Audible is located in Newark,” says Collins. “It’s certainly a huge consideration for a company like Amazonor any of the companies that we think of as ‘big tech’.”

Collins points out that Newark has always been at the crossroads of American history and technology. International telephone and telegraph lines converged in Newark at pretty much the same corner of Broad and Market Streets where covered wagons and trading posts had, in an earlier age, organized the western expansion.

“The key message is really Newark is on the rise,” says Aisha Glover, president of Newark Community Economic Development. “Being shortlisted by Amazon has had a significant impact over over the last six months. And I think also, the corporate investments, you know, there have been major projects announced, so I think that always piques folks’ interest, like, ‘wait, is there something I’m missing out on?’”

With Thomas Edison inventing light bulbs and talking machines in nearby Menlo Park and Bell Labs locating engineers for the AT&T long distance network in Newark, it seems only fitting that the city should have a tech revival in the Internet age.

“It is now cool to talk about the fiber and the bandwidth and all that kind of stuff as the technological infrastructure,” says Collins, “but it’s always been here, and whether it’s been rails or the highway network, or the port or the airport, technology has always been what has driven Newark’s economy.”