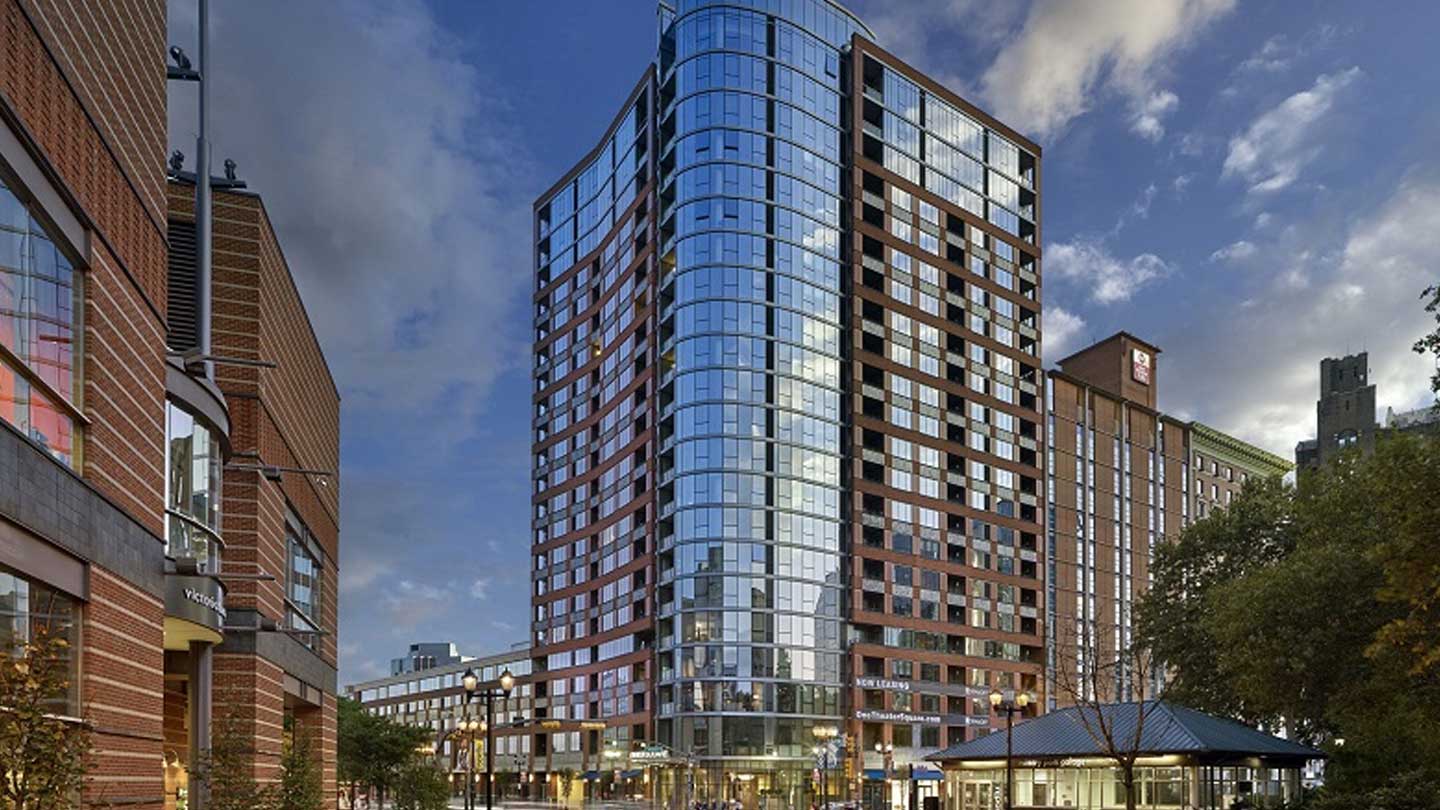 One Theater Square, a 22-story tower across from the New Jersey Performing Arts Center in downtown Newark, launched leasing last June and was more than 60 percent leased through late May. The luxury building developed by Dranoff Properties is home to 221 market-rate apartments and 24 affordable units. — Courtesy: Dranoff Properties

A new stock of luxury, market-rate apartments is beginning to take shape in downtown Newark, where stakeholders hope to attract the type of rental population that can create a 24-hour, seven-day neighborhood that has long eluded the central business district.

Developers say they’re encouraged by the early returns, but are preparing for the market to be tested by larger-scale projects and an influx of additional units. City officials are also preparing for what could be a dramatic uptick in interest from builders — which they will have to balance with public policy goals such as expanding affordable housing for Newark residents.

The downtown has added about 1,600 market-rate units across a dozen projects over the last six years, according to Natasha Rogers, the city’s interim deputy mayor of economic and housing development. That total could more than double by 2024 with the completion of the projects that are currently in Newark’s pipeline, she said, and that doesn’t include proposals that have not advanced through the city’s planning commission.

Natasha Rogers
“That shows the demand for units, specifically in the downtown area,” said Rogers, who was quick to note that the administration is focused on attracting investment throughout city.

The few large market-rate projects that have opened to date — which comprise both ground-up development and rehabilitated historic buildings — could provide clues about what’s to come in the downtown. Developers say employees at major companies such as Prudential Financial, Audible and Public Service Enterprise Group, along with those at institutions such as Rutgers University, have accounted for a major portion of the renter base at new apartments.

“We’ve now determined that there was a shortfall, that people really would rather walk to work and that many of our customers were working in Newark and just didn’t have any housing choices,” said Carl Dranoff, the founder and president of Dranoff Properties, which last fall opened the 22-story tower known as One Theater Square. Located at 2 Center St., across from the New Jersey Performing Arts Center, the luxury building is home to 221 market-rate units and was more than 60 percent leased through late May, a year after the launch of leasing.

About two-thirds of the building’s occupants work in Newark, Dranoff said, noting that those renters also include employees of law firms, startups and other smaller businesses. That means One Theater Square’s other residents are likely taking advantage of Newark’s robust transportation network to commute to other locations — or they are students at one of the city’s universities — providing a healthy diversity within the rental base.

Carl Dranoff
Rents at the building have also exceeded $3 per square foot, which Dranoff believes “was a threshold number for Newark,” while still offering considerable value compared to other upscale rental markets such as Jersey City and Hoboken. What’s more, the firm has found its overall renter base to be “an older, more affluent group than we anticipated.”

For instance, 42 percent of its customers through late May were over age 35, while 61 percent had an annual income above $125,000.

“People are waking up and seeing the value and that you’re not giving up anything,” Dranoff said, noting that One Theater Square offers a host of high-end amenities and sweeping views of Newark and the Manhattan skyline. He believes that renters who are coming from the suburbs, neighboring Harrison and elsewhere “are seeing that it’s a much more attractive, pedestrian-friendly community.”

Real estate attorney and Newark native Frank Giantomasi notes that the city is home to five wards and many distinct neighborhoods. That means it has a wide range of multifamily stock that varies by age, design and price point, but bringing newer market-rate, luxury apartments to the Central Ward has been a gradual process in recent years, even as the city’s largest employers and anchor institutions have invested in new buildings.

That has required developers to start small when it comes to introducing new market-rate units downtown. Local investors such as Fidelco Group and Hanini Group were among the first to do so, from 2011 to 2014, delivering 80 units after retrofitting eight historic properties on Market Street near the Prudential Center.

L+M Development Partners, Prudential Financial and The Goldman Sachs Group have restored and converted the historic Hahne & Co. department store in downtown Newark. The property is now a mixed-use complex that includes 160 apartments, a 29,000-square-foot Whole Foods store and other retail and office space. — Courtesy: L+M Development Partners
In 2017, an investment team led by Prudential Financial, L+M Development Partners and The Goldman Sachs Group completed their rehabilitation of the historic Hahne & Co. department store on Broad Street. The project’s 96 market-rate rentals were leased in less than a year and have remained fully occupied, as have its 64 affordable units.

Jonathan Cortell
“I think Hahne’s is affirmation that the market-rate rental experience is a positive one,” said Jonathan Cortell, L+M’s managing director for Northeast markets. He added that “it certainly hasn’t hurt” that Hahne’s is a mixed-use property that counts Rutgers among its tenants, along with the convenience of having a 29,000-square-foot Whole Foods store, the city’s first, on the ground floor. That same is true for Marcus B&P, a restaurant by celebrity chef Marcus Samuelson that opened in the building last year.

For his part, Giantomasi said he believes Whole Foods has been “the single largest driver of downtown occupancy,” creating a comfort level for would-be residents that they can buy quality groceries within walking distance. He also cited the impact of Marcus B&P and the recent renovation of Military Park, which sits between Hahne’s and One Theater Square.

“That has provided people with a good, free open space to go to,” said Giantomasi, a member with Chiesa Shahinian and Giantomasi PC in West Orange. He also said there was “eager anticipation” for a similar renovation of Washington Park about two blocks north, which would provide “some real linkages along Broad Street.”

Francis J. Giantomasi
Giantomasi and other insiders say downtown Newark still needs additional restaurants, bars and other businesses that will create more of a fabric within the neighborhood, which will likely follow as new residents move in. But the new amenities to date have paved the way for the latest additions to the downtown’s market-rate inventory and for what is still to come in the city’s pipeline.

To that end, the L+M, Prudential and Goldman Sachs team recently launched leasing at the site of its second historic rehab in the city, located at 540 Broad St., where it has delivered 264 mixed-income units within the landmarked New Jersey Bell building. About two blocks to the southeast, Boraie Development has just debuted a ground-up, 168-unit tower at 50 Rector St. that it has built in partnership with NBA legend Shaquille O’Neal.

The projects will be the largest to hit the market in Newark this summer, and both developers feel that the addition of new supply will only help create the market downtown.

A partnership led by Prudential Financial, L+M Development Partners and The Goldman Sachs Group recently launched leasing at Walker House, located at 540 Broad St. in Newark, where the joint venture has retrofitted the landmarked New Jersey Bell tower into a mixed-use building that includes 264 apartments, retail and office space. — Courtesy: Inglese Architecture & Engineering
“If people are going to come to the town, they want to see four or five buildings,” said Wasseem Boraie, a vice president with Boraie. “Nobody is going to visit your city to look at one building. … Now, in Newark, you can come see five super Class A buildings in one day and there’s a different product type for every person. That’s what makes a market.”

Boraie noted that developers in Harrison, which sits directly across the Passaic River, have managed to build thousands of units and create a market in a vacuum thanks in part to its proximity to downtown Newark. In the absence of an established market, he said the projects in Harrison have helped provide guidance as to how renters would respond to 50 Rector Park, but it’s now up to developers in Newark to provide something that will capture their attention.

Wasseem Boraie
“They’ve done a really nice job executing on the plan,” Boraie said of the developers in Harrison. “And it’s now on the guys in Newark to execute on their plan. People aren’t going to just cross the river because Newark says, ‘We’re open.’ You’ve got to have a product that people think is good. So it really comes down to how well people provide something that’s missing from those other areas.”

If that market does in fact develop, city officials are preparing for the continued wave of interest from the commercial real estate sector. For instance, Rogers said the Department of Economic and Housing Development is in the process of hiring six new zoning officers, among other changes, “to create a more seamless operation to deal with the large demand that we have in the city.”

That also means ensuring that other city agencies, such as the Workforce Development Board and the tax assessor’s office, are involved from the outset when developers are presenting a project, she said. Doing so is critical to not only making the process more efficient, but fulfilling many of the public policy goals and laws that have emerged under Mayor Ras Baraka and tie directly to development.

Chief among them is the city’s inclusionary zoning ordinance, which took effect in January and requires developers to set aside 20 percent of their units as affordable housing if the project includes more than 33 units or if they are seeking a tax abatement or variance. The city has also established a 15-member Equitable Growth Advisory Commission to ensure that new development and investment does not result in gentrification or the displacement of low-income and vulnerable residents.

She noted that, even before the ordinance took effect on Jan. 1, many developers “were strong partners with the city and understood what the mission and vision of the administration was,” leading to commitments to build affordable housing and hire locally, when possible.

Giantomasi said developers have taken notice of the city’s effort to streamline its economic development functions and work cooperatively with the private sector. Those efforts are impactful to a project, he said, as are the need to navigate affordable housing, hiring requirements and other public policy goals that make up “the jigsaw puzzle of development that developers have to address everywhere.”

But above all else, Giantomasi believes the city is in a place in which both the private and public sectors can achieve their goals

“Every hot spot of activity has its own unique drivers that have to be addressed,” he said. “And you have to figure it out. The most important thing, I think, is that we are actually getting interest and visits in Newark now from out-of-town and out-of-state, major developers who really are believing that Newark’s time is here or just about to be here in full blossom.”